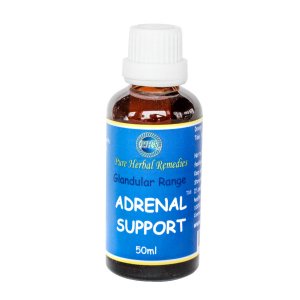 This formula is for

Adrenal support is a general endocrine tonic as well as being specific for the adrenal glands. It is very useful for people who live a high stress life and suffer from fatigue and burn out. When one is stressed for a long period of time, the adrenal glands cannot produce the amount of adrenaline that you are constantly functioning on when stressed and so gets fatigued, leaving you feeling tired and lifeless.

Adrenal support is a general tonic for the adrenal glands. It works on helping to regenerate adrenal function while reducing the symptoms of stress and fatigue cause by exhausted adrenal glands. When adrenal function is restored, it becomes easier for other glandular functions to restore. Therefore Adrenal Support is also a general endocrine tonic.

Who should use it: Anybody who suffers from stress and fatigue. The typical person with adrenal exhaustion lives a high stress life, drinks a lot of coffee and eats a lot of sugary foods. This formula is best used with Pancreas support.
Who should not use it: Pregnant or breast feeding women. Not recommended for children under 12 years of age.
Dosage: 20 drops 3 times per day. Dosage can be increased for severe cases and decreased as symptoms improve.